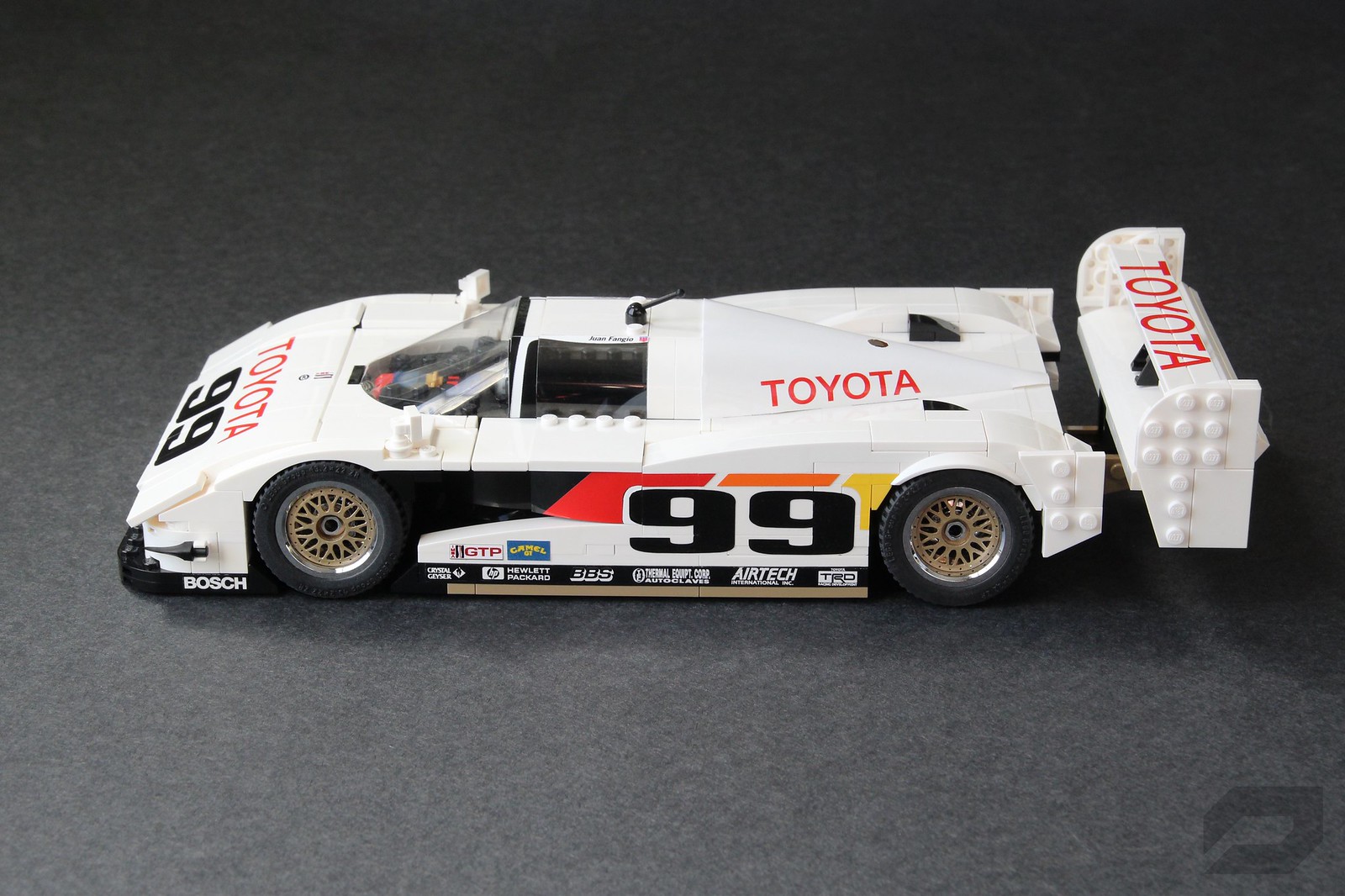 Dan Gurney and his All American Racers team had been on a learning curve with sports cars which really started heating up with the beastly GTO-class Toyota Celica. Their foray into big-league prototypes came first with an adaptation of a Group C based Toyota 88C and then the team's own 962-inspired HF89. These all helped to forge reliable power from Toyota's 2.1 liter twin-cam 4cyl and teach many valuable lessons in designing and building a robust and competitive car.

The MkIII debuted in 1991, entering into arguably the most competitive of GTP's seasons. The now-mighty little Toyota engine was connected to a compact carbon-fiber space-capsule wrapped in an achingly-simple shape which hid massive aero tricks. Dominance quickly followed with 21 victories in 27 races entered over three seasons. 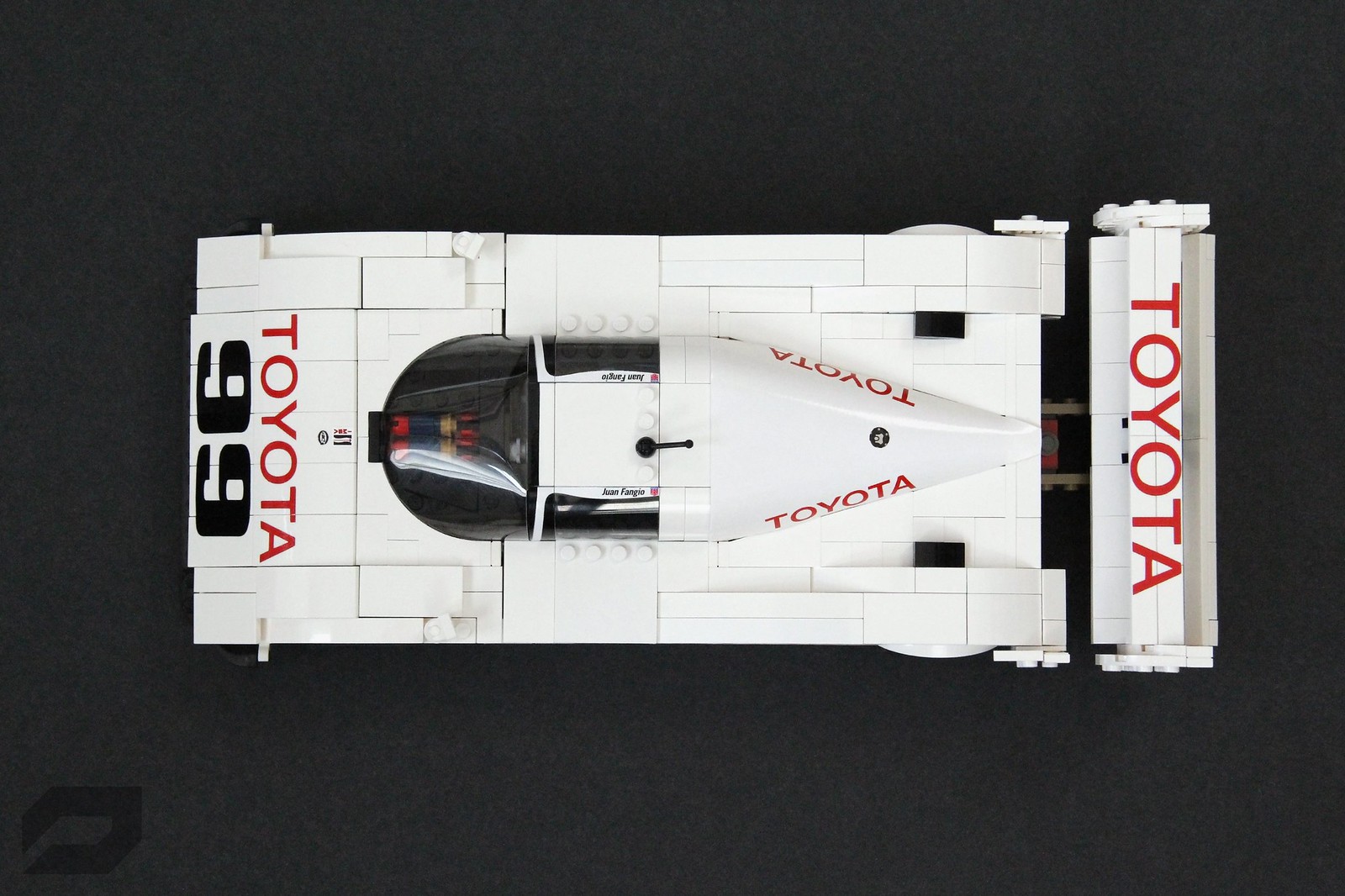 The glory of the series wouldn't last. By 1993, a global recession and conflicting technical regulations thinned the field such that at the end of the GTP era, Dan's team was effectively left battling itself. For what it's worth, I don't believe this is "the car that killed GTP"... Successful racing series don't die because a team or a car dominate, that's what heads-up rulemakers govern and what motivated competitors rise to challenge. These guys were just the last ones standing as top-tier sports-car racing collapsed worldwide.

The exterior build posed a few challenges, mostly in capturing the layered smoothness of the nose and weaving slopes together to form the severe cutaway area aft of the front wheels. One of the things which has made me reluctant to work at this scale in Lego is the lack of an elegant solution for the heavily-curving windscreens and rear cowls found on prototypes. I wanted to capture the smooth simplicity of the MkIII's shape without doing complex arrays of small parts for the glass and engine cover, so these surfaces are done as single-piece sheet elements designed to lock into the Lego framework. 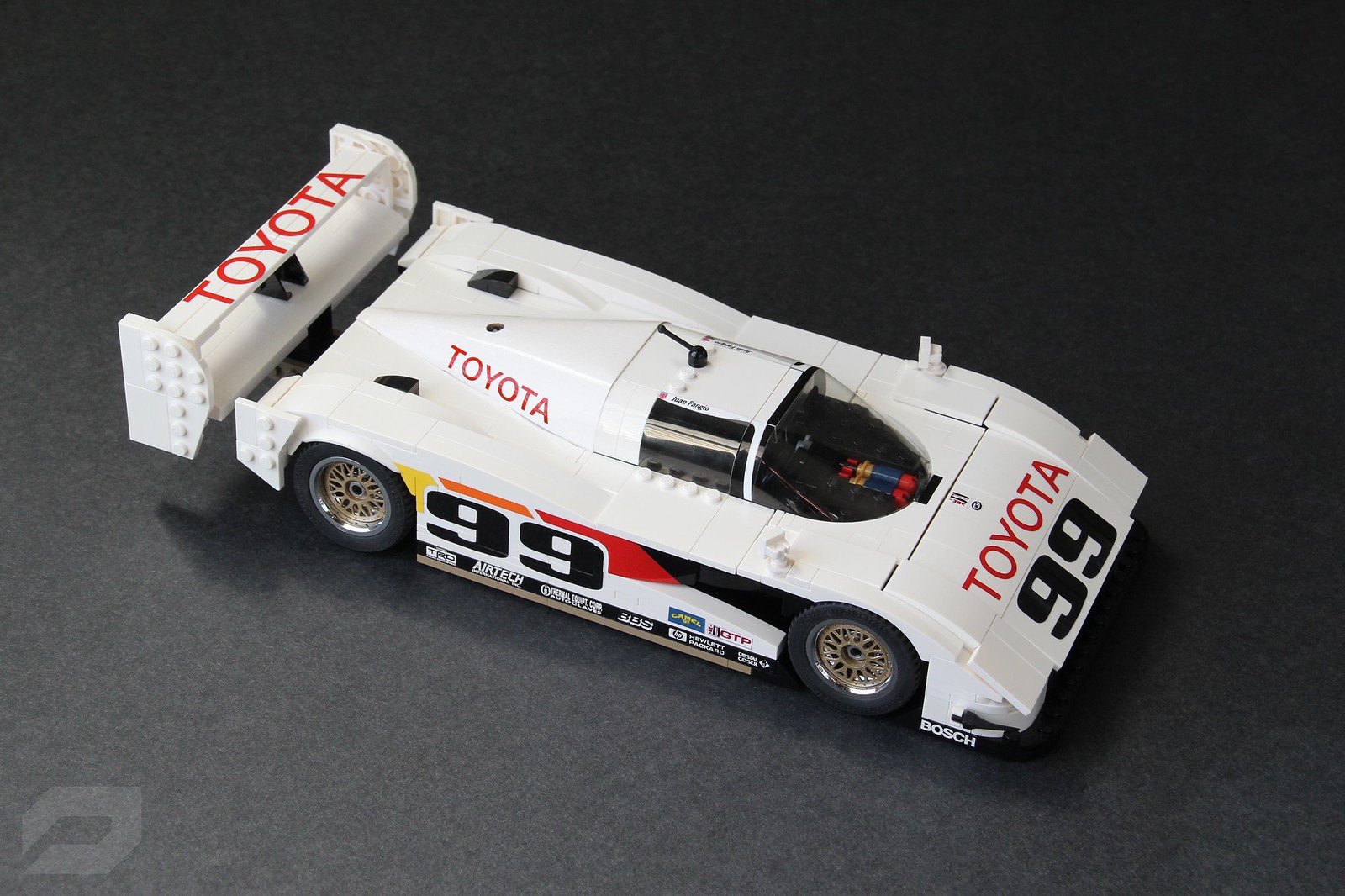 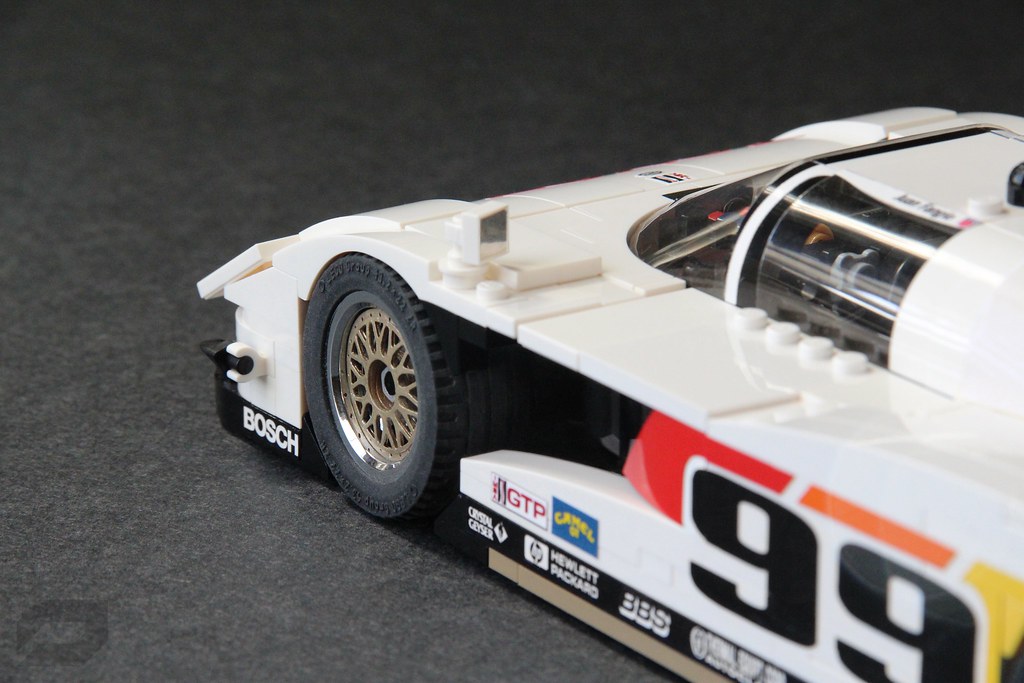 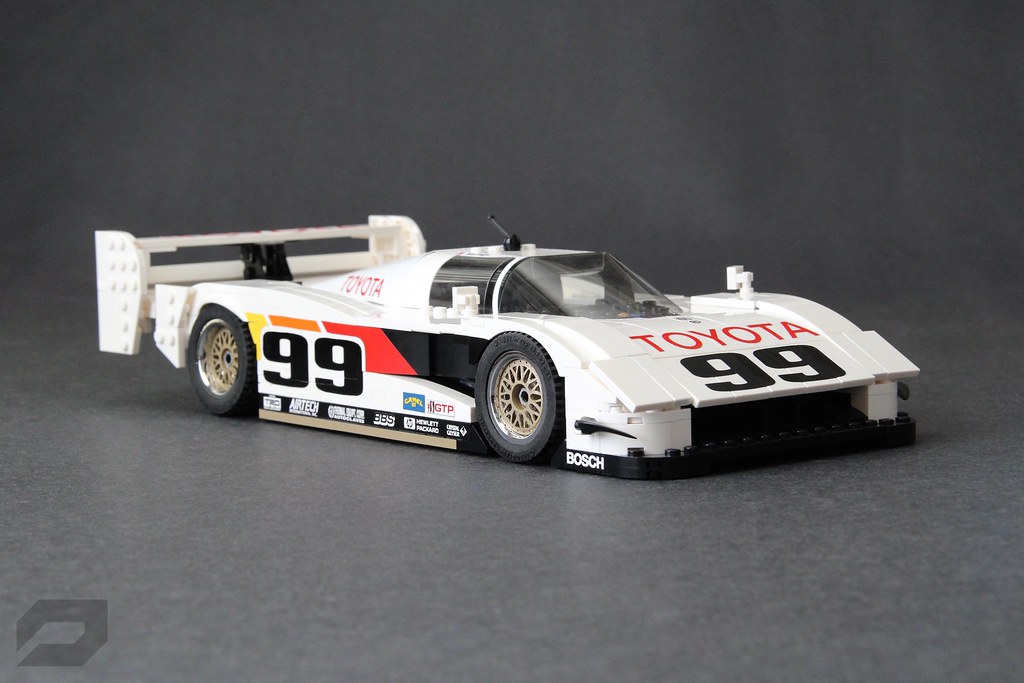 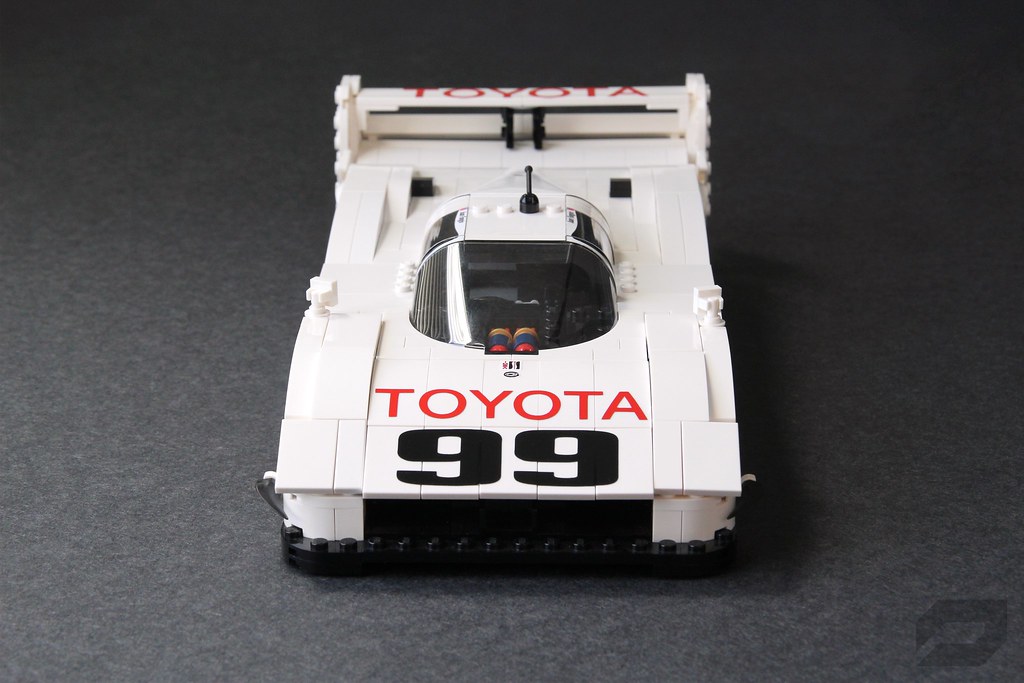 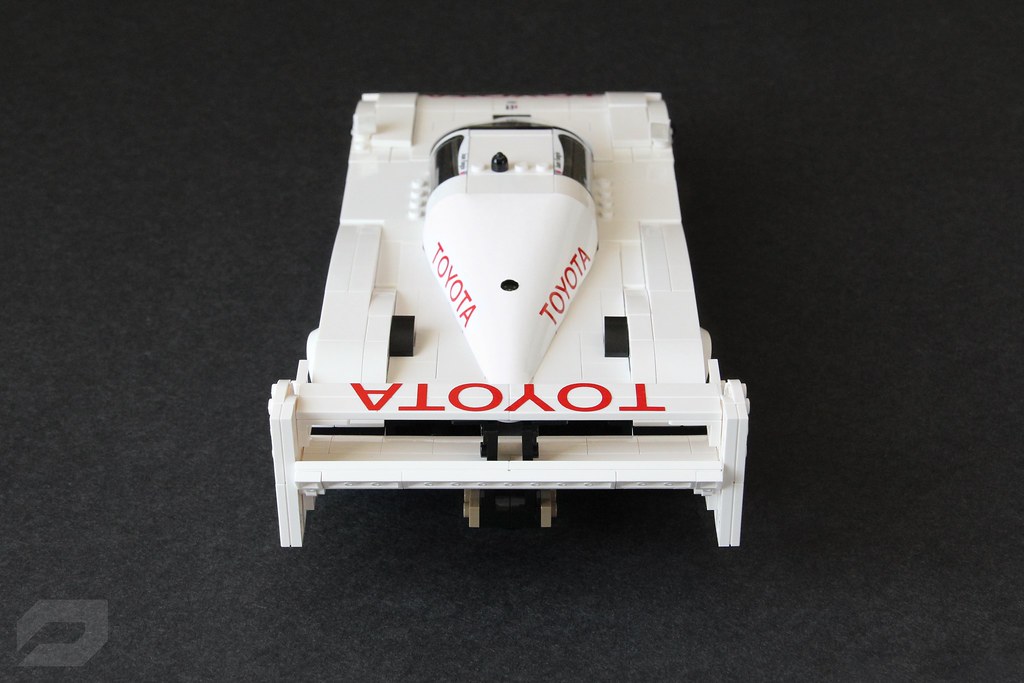 Underneath the bodywork, the MkIII's chassis is layers of very clever engineering done with a beautiful aesthetic of carbon fiber, kevlar, bare exotic metals, spindly gray-painted suspension arms, and amazing red-anodized fixing points throughout. It's very purposeful but also very cohesive and elegant. This translates into an opportunity for some excellent Lego part and color usage. 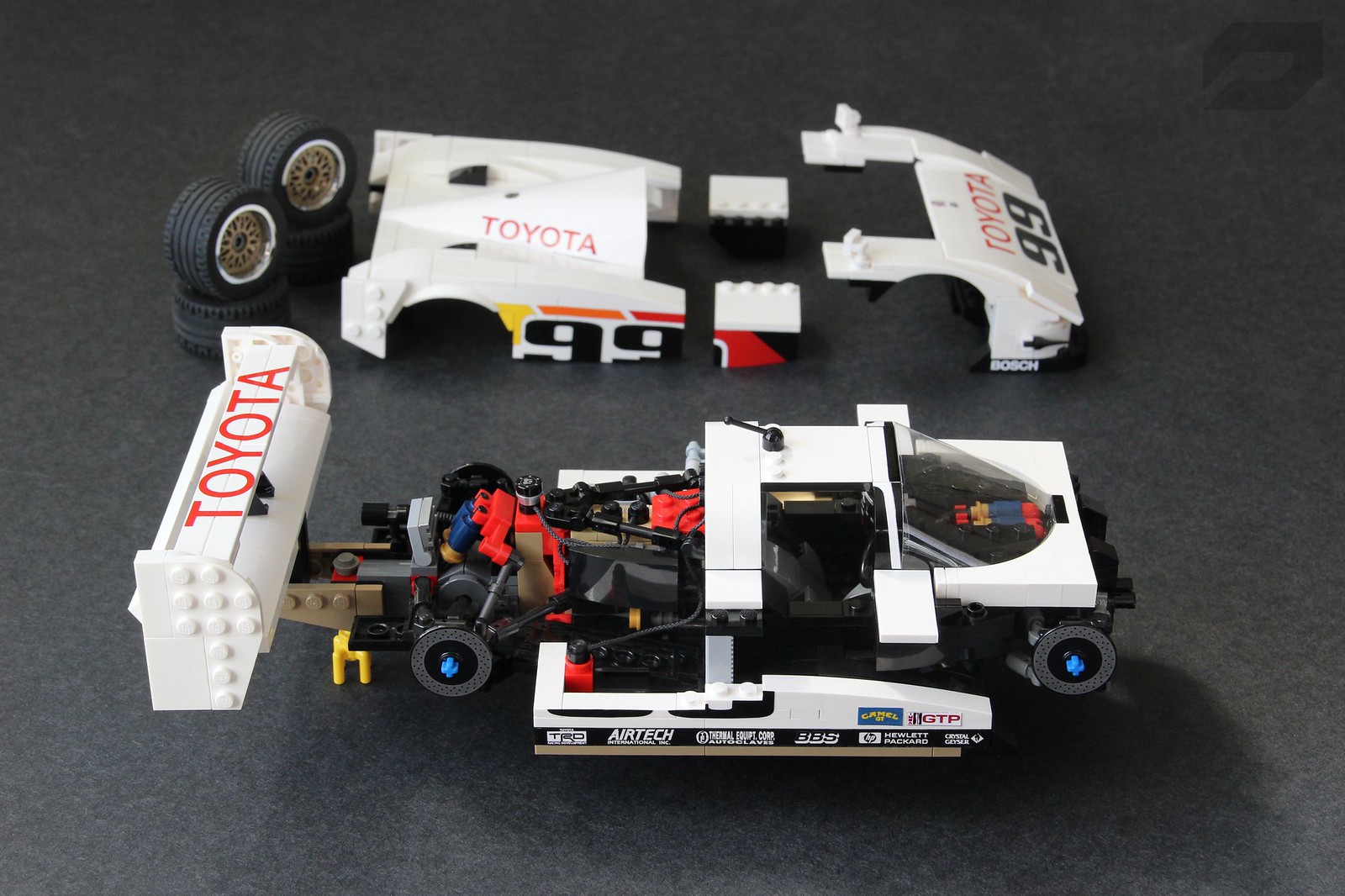 My primary goal for this model was to render a study of the engineering under the skin and to capture the modularity of prototypes as much as possible. There's the core monocoque tub and a separate drivetrain, with further modules for the ducted side pods, doors, front splitter, bodywork, wing, etc. Hung off the chassis at all four corners is a suspension of bars and clips locating #90202 Technic wheel hubs. 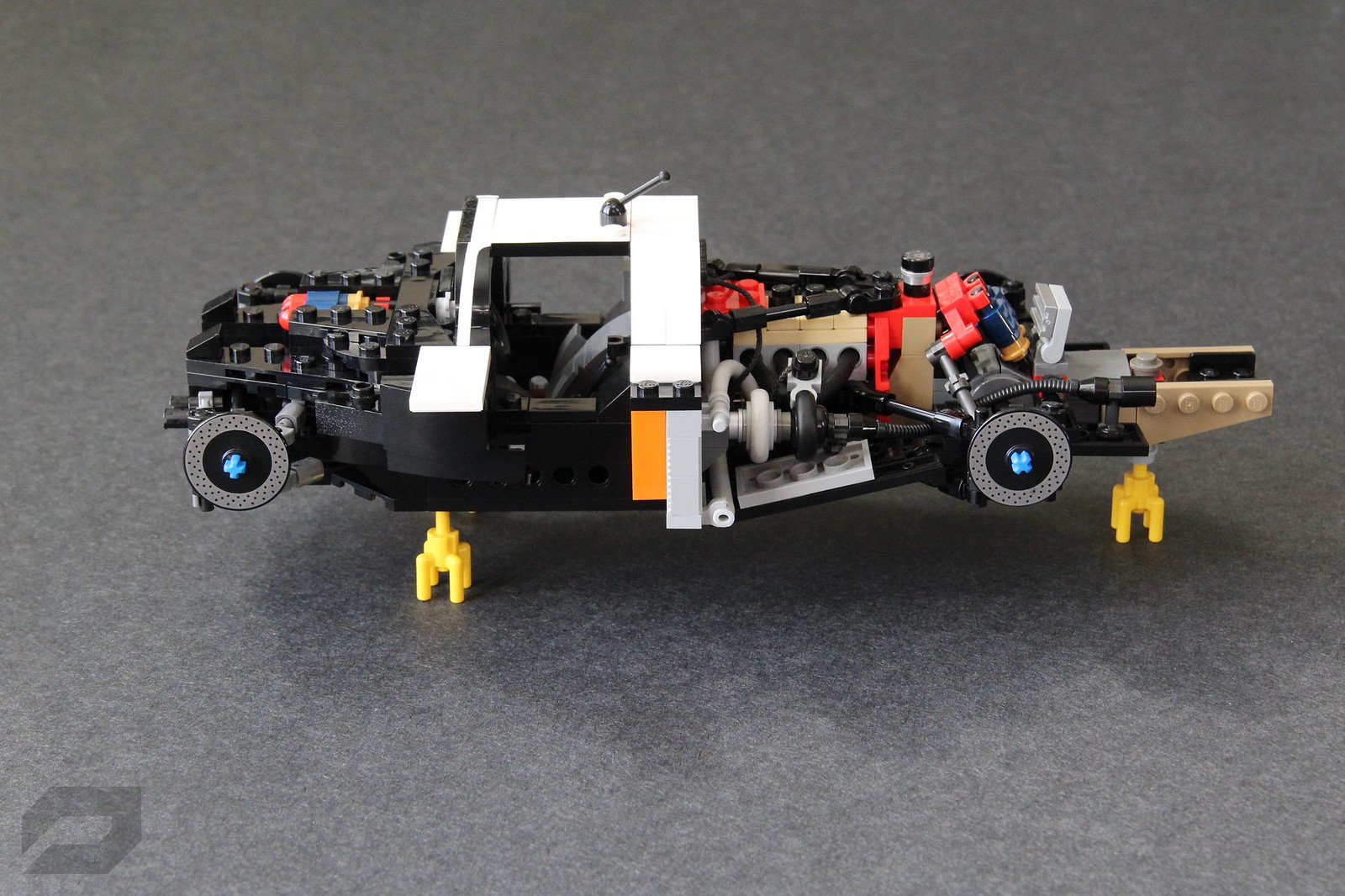 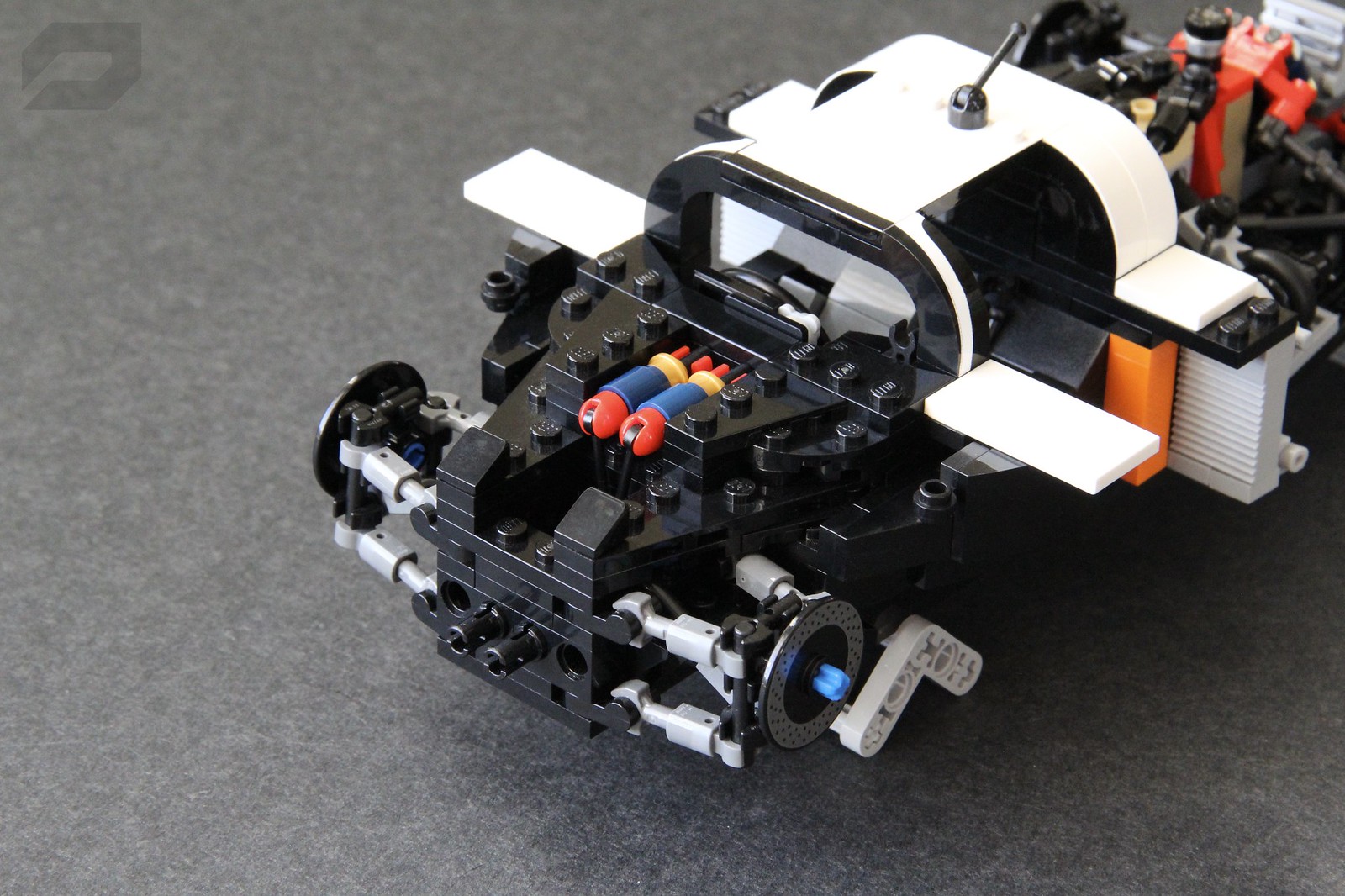 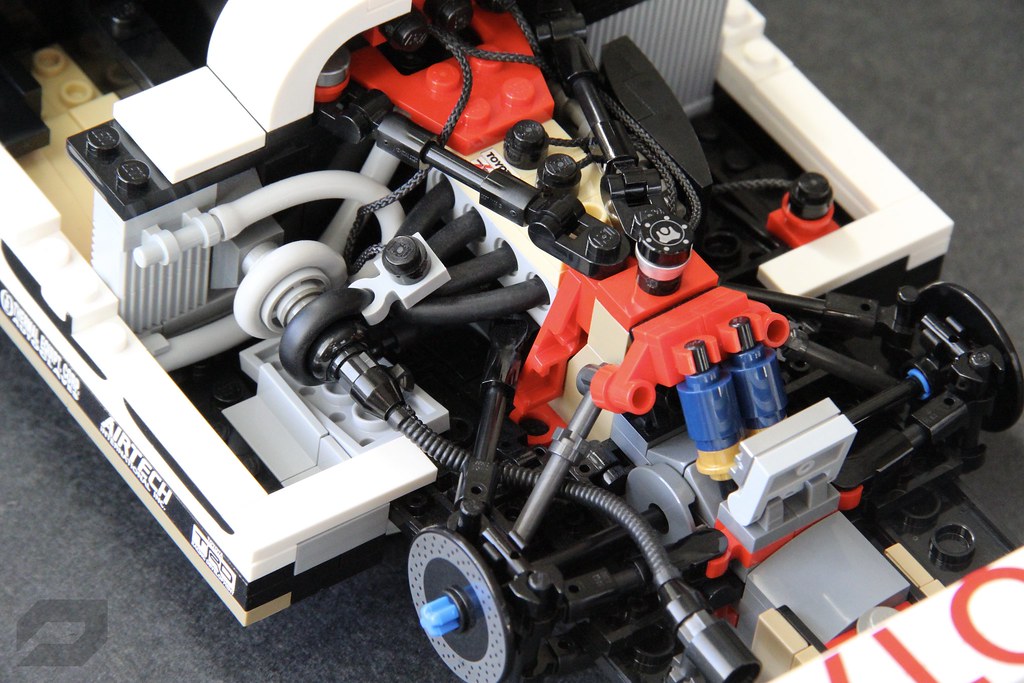 The driveline build captures the MkIII's key features: the semi-structural and heavily-turbocharged Toyota 503E engine, the big red anodized mounting plates, the tall trapezoidal magnesium bellhousing which serves as the oil tank and rear suspension rocker-arm mounting structure, and the long load-bearing plates for the rear wing. This rear half of the model is mounted to the tub as in the full-scale car: plates at the top and base of the engine plus struts locating the central suspension structure. Despite all this modularity, the model builds up to be very solid. 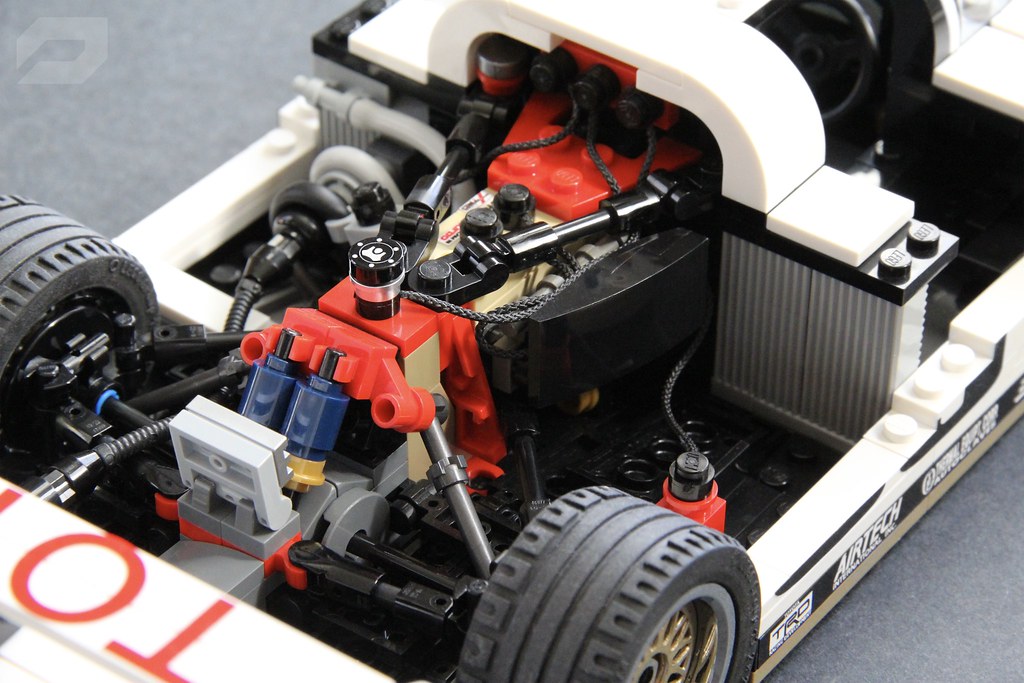 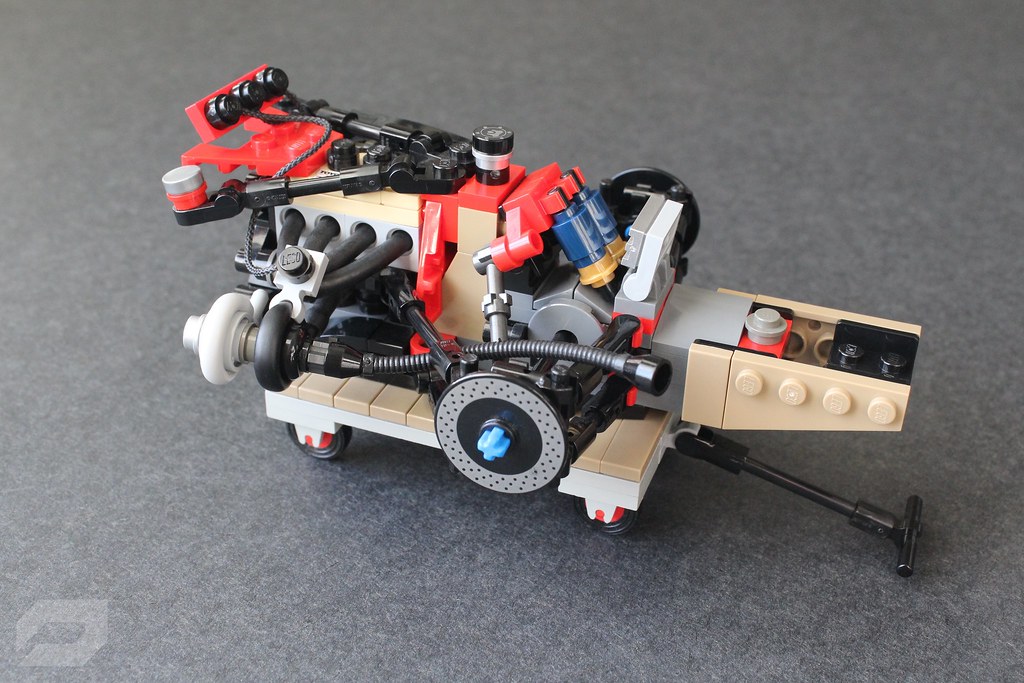 The cockpit is complete too; the seat, steering wheel, digital dash, switch panel, giant boost knob and handy "hardwood" shift-knob are all tucked in there. Other details inside include the bulkhead-mounted electronic engine-management modules and the front suspension's lower trailing-arm mounting structure. 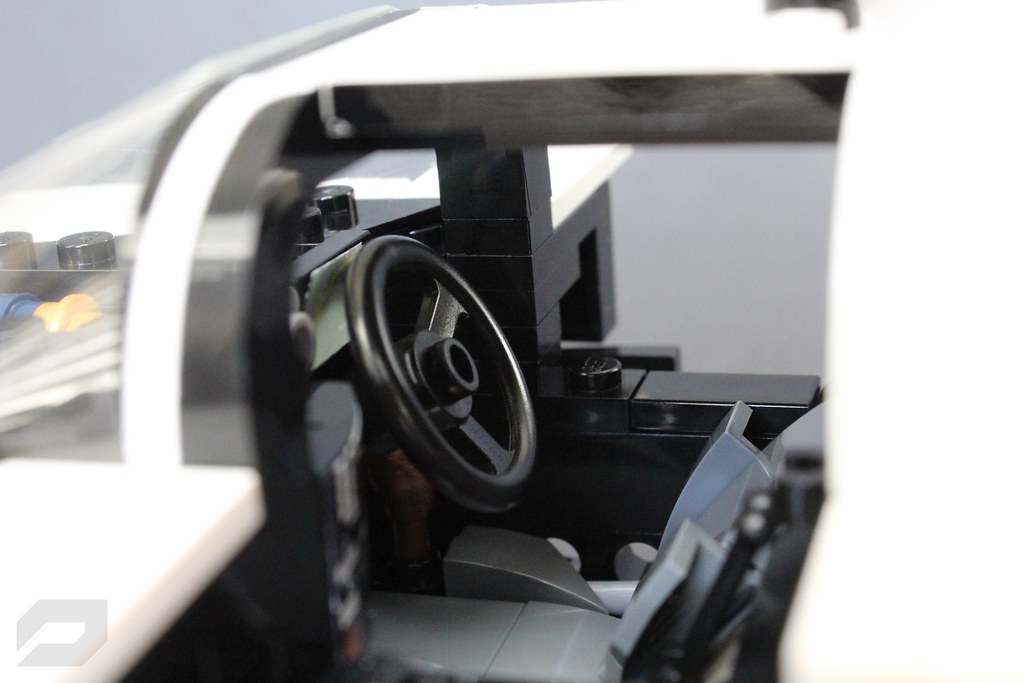 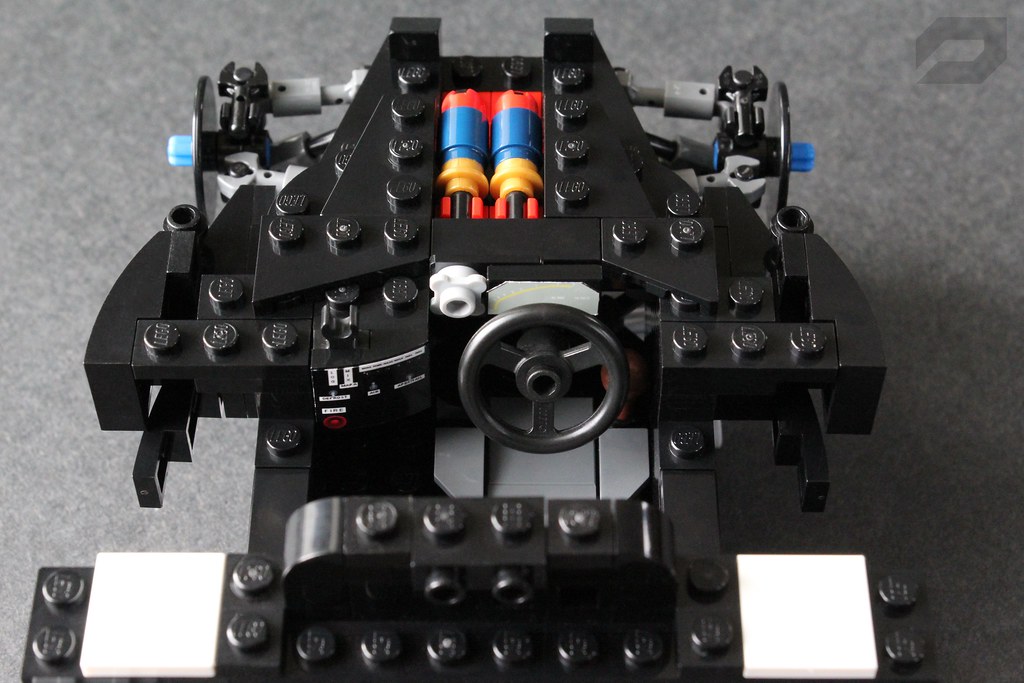 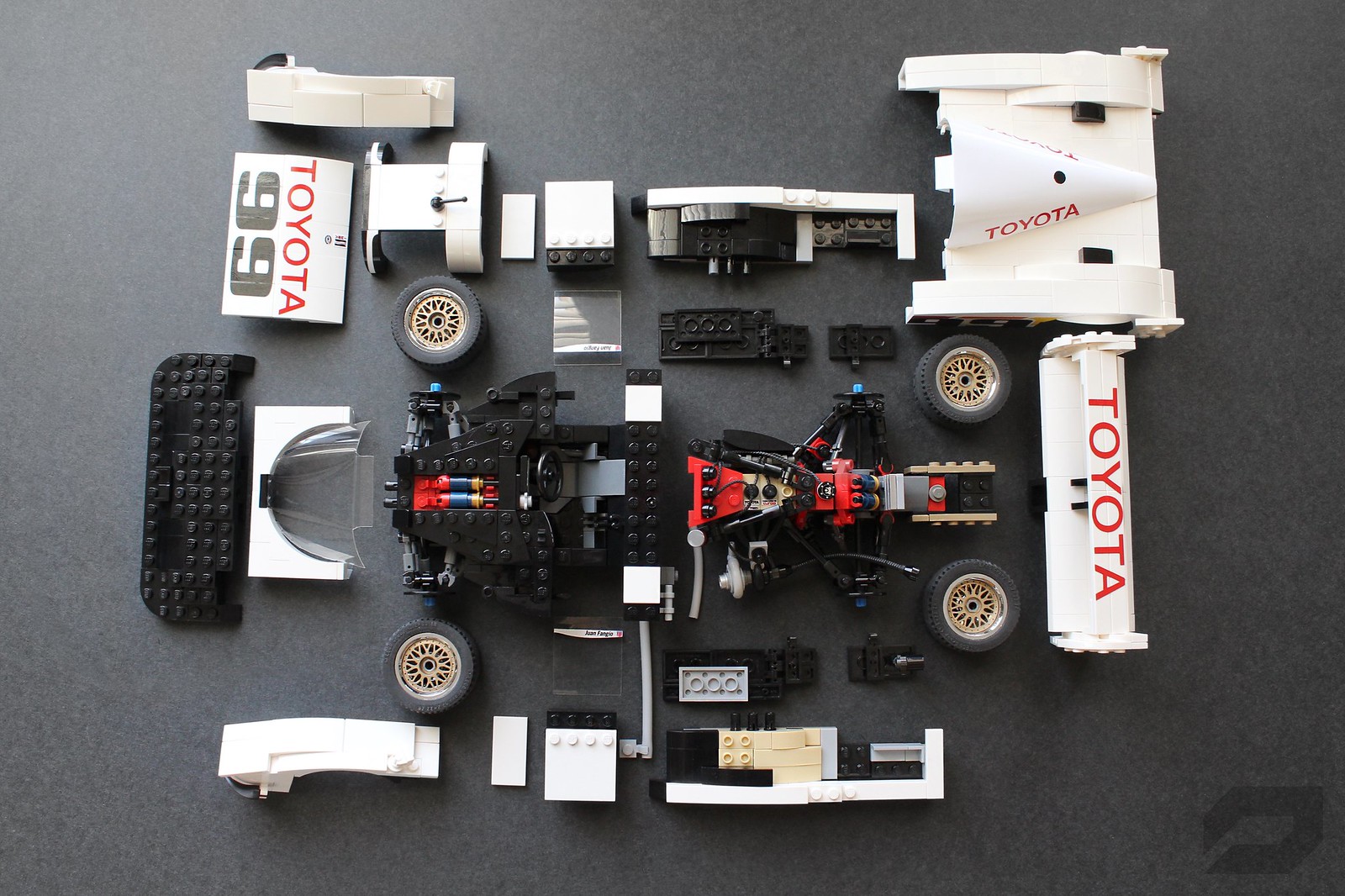