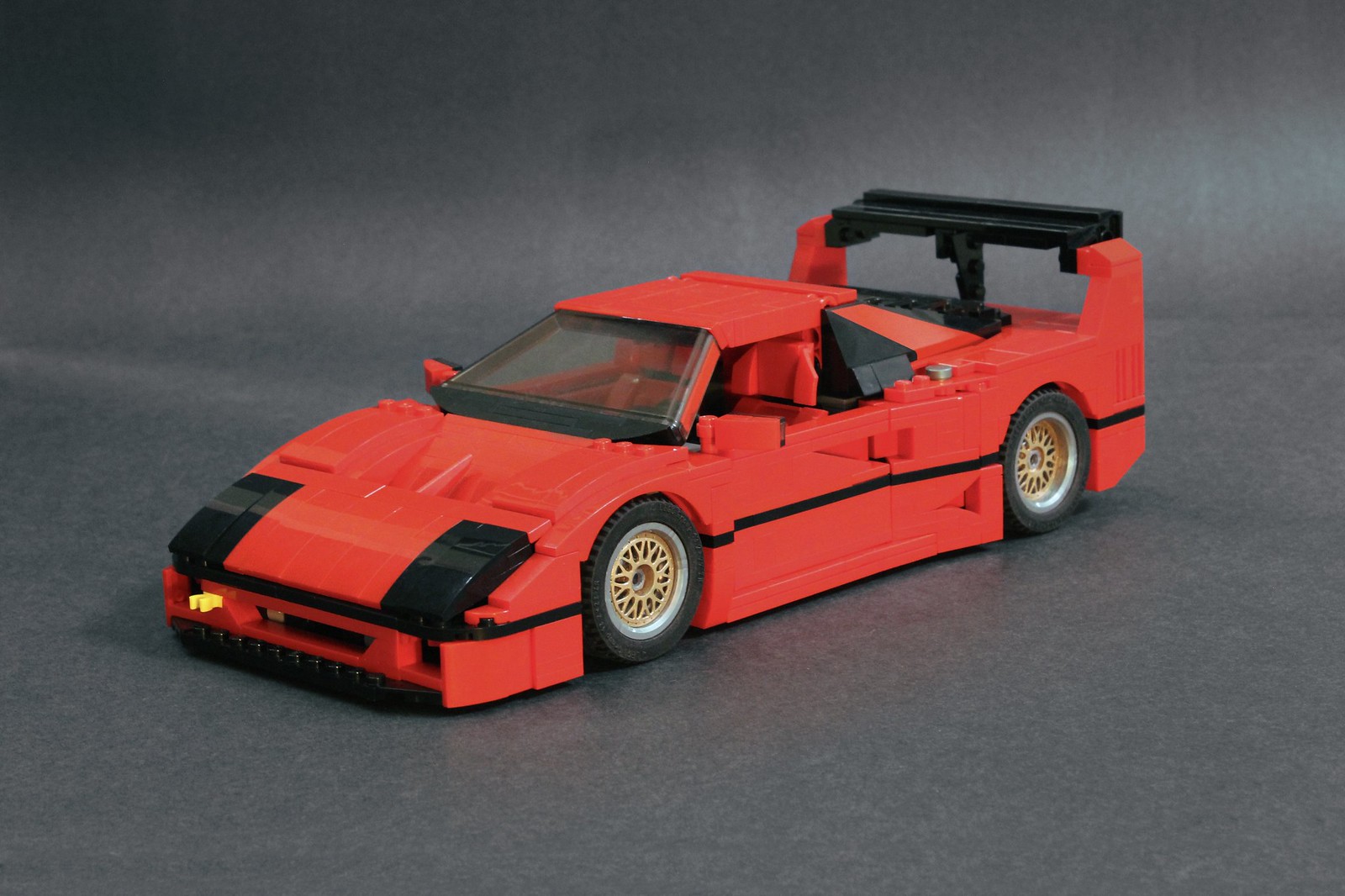 The F40 LM is the race car version of what was already mostly a race car. Nineteen competition-ready F40's were built by Chinetti Michelotto for Ferrari; lighter, lower, more powerful and full of racing-specific tweaks.

This modification of Lego's 10248 set builds one of these legendary LMs inside the lines of their design. The kit's brilliant overall shaping and clever build solutions provide a framework for revised proportions and deeper detailing. Nearly every step of the build is altered and most assemblies have been heavily redesigned. Exterior changes for the LM-spec bodywork are an extended front splitter, fixed headlights, a top-vented front hood, taller rear wing and open mesh rear bodywork. The lengthened doors and repositioned fuel-tank pods were informed by Brickmonkey's modified build, while the gray interior firewall was removed entirely, allowing the seats to be extended back along with the stretched doors for a more properly-scaled cabin. The black trim line is now brick-built the full circumference of the car, and the chromed #56145 rims from Bricks4All have fully scratch-built BBS LM wheel inserts (BBS wheel post). 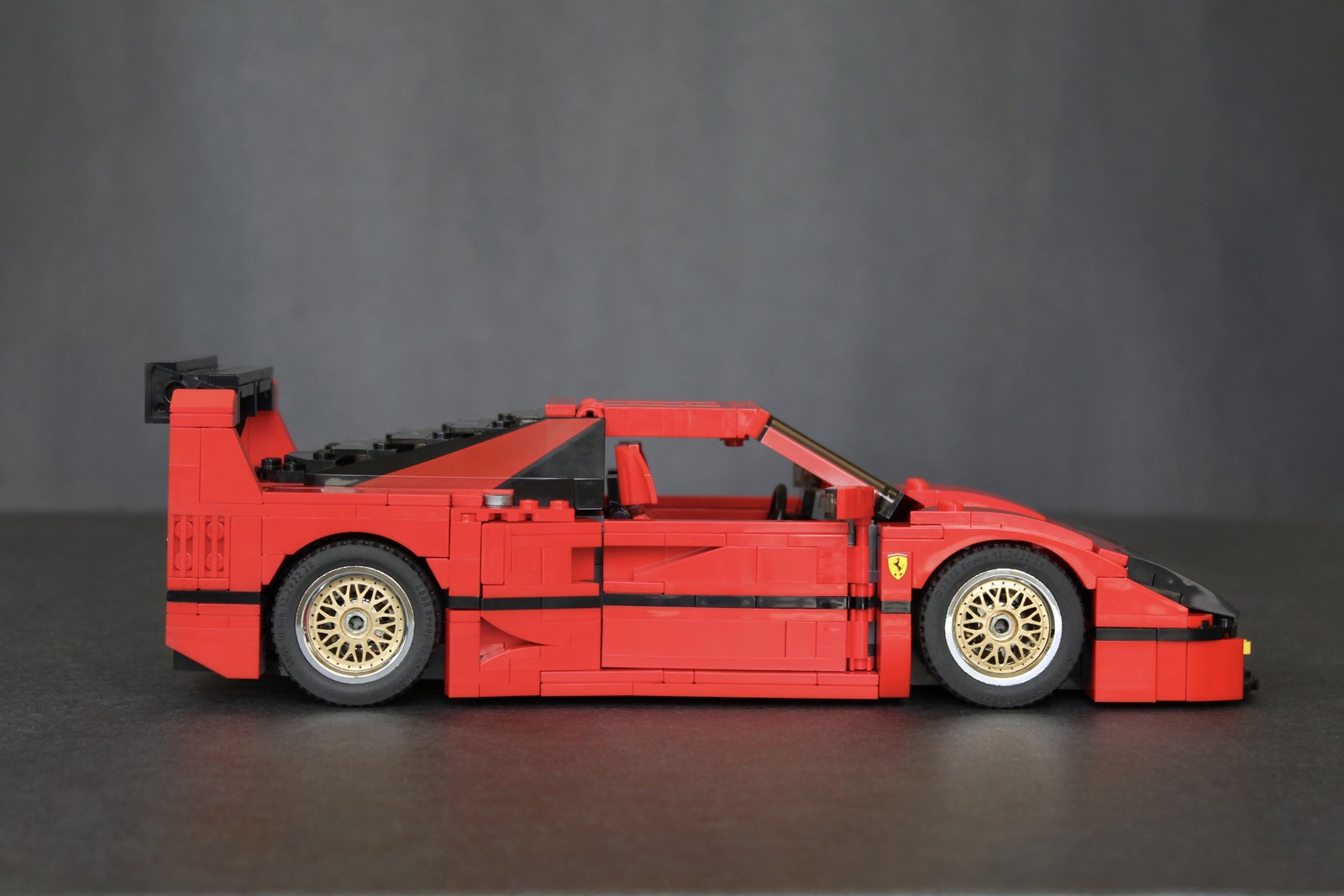 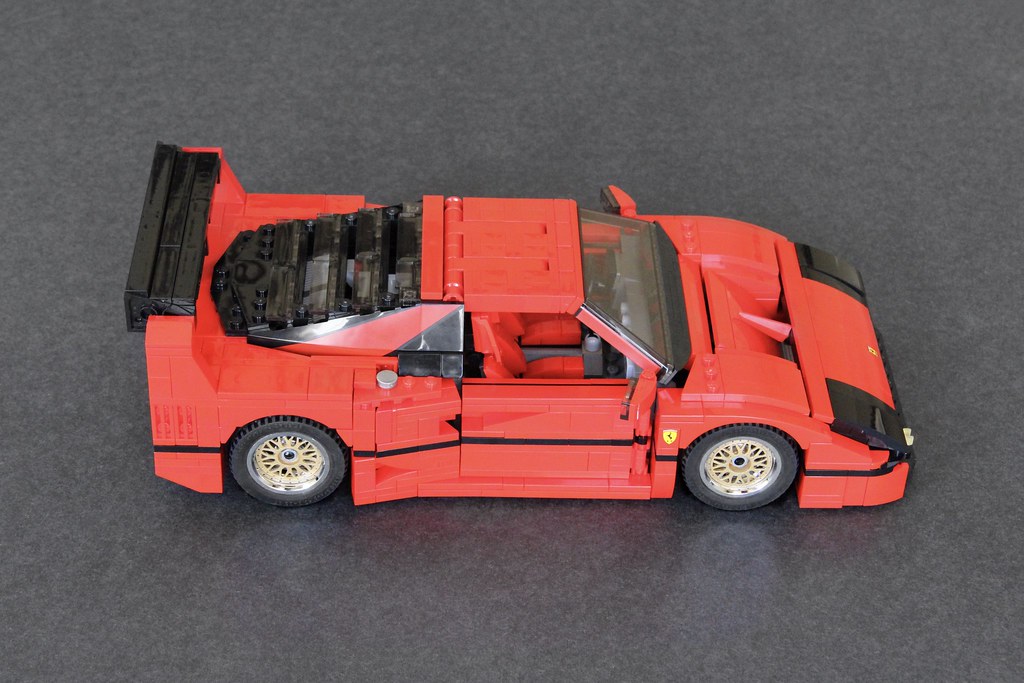 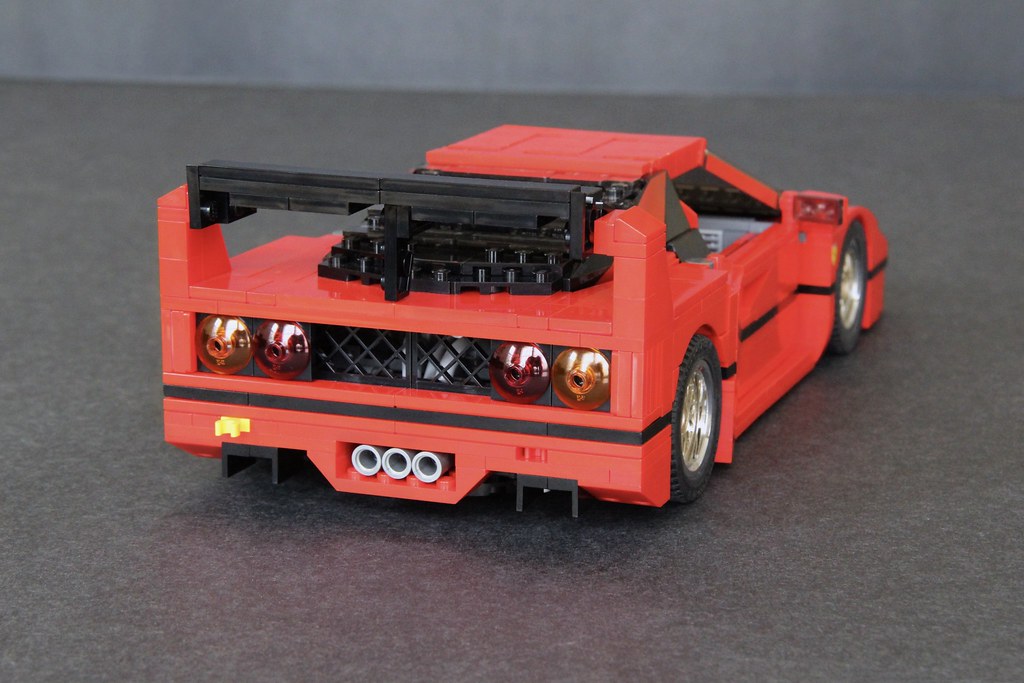 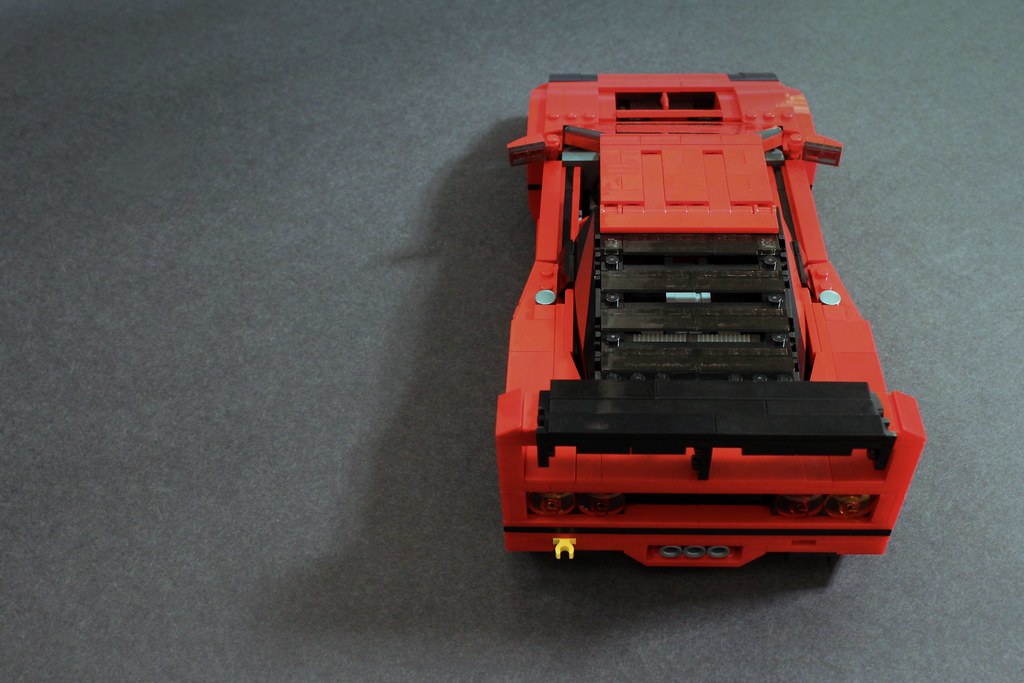 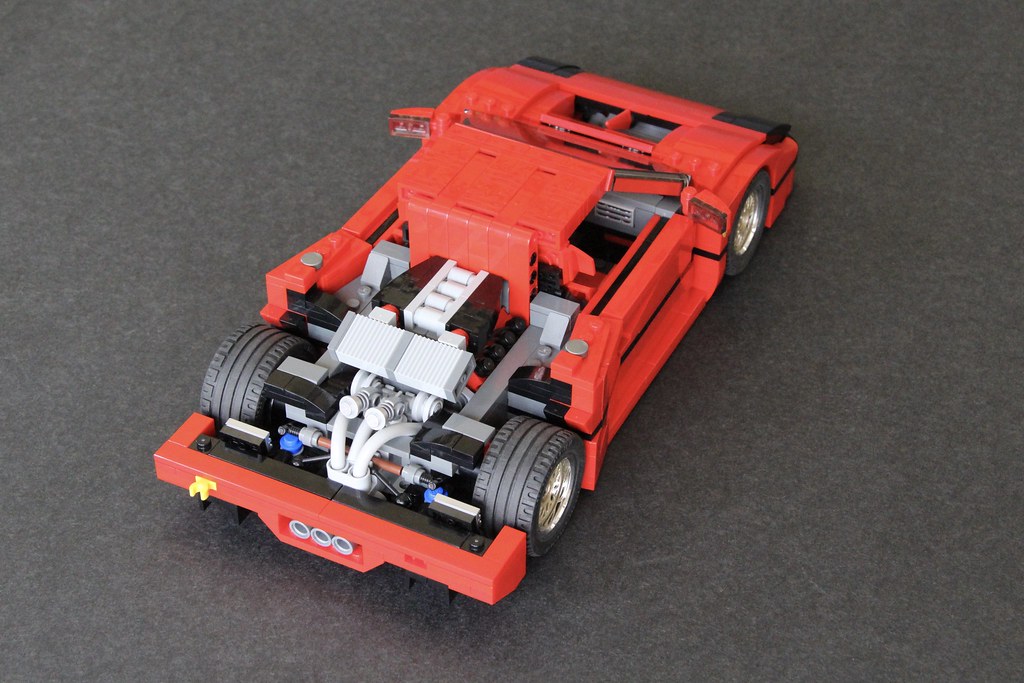 My original goal of just lowering the 10248 model's ride height rapidly evolved into in a fully revamped chassis, keeping only a small portion of the central floor along with the clever side sills from the original design. The race-spec front section carries an oversize radiator, air jacks, sway bars, repositioned hydraulic reservoirs, low-mounted battery and front bodywork supports all suspended along Technic beams. The redesigned rear chassis lifts the axle position and provides mounts for the sway bar and air jack details as well as vestigial rear springs and oil coolers. 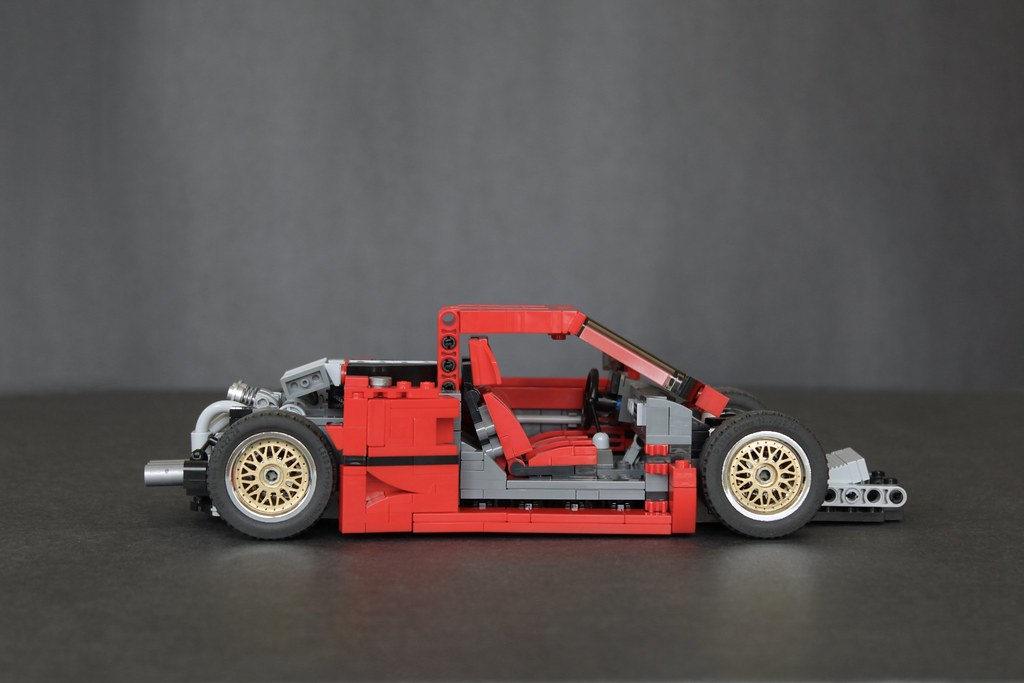 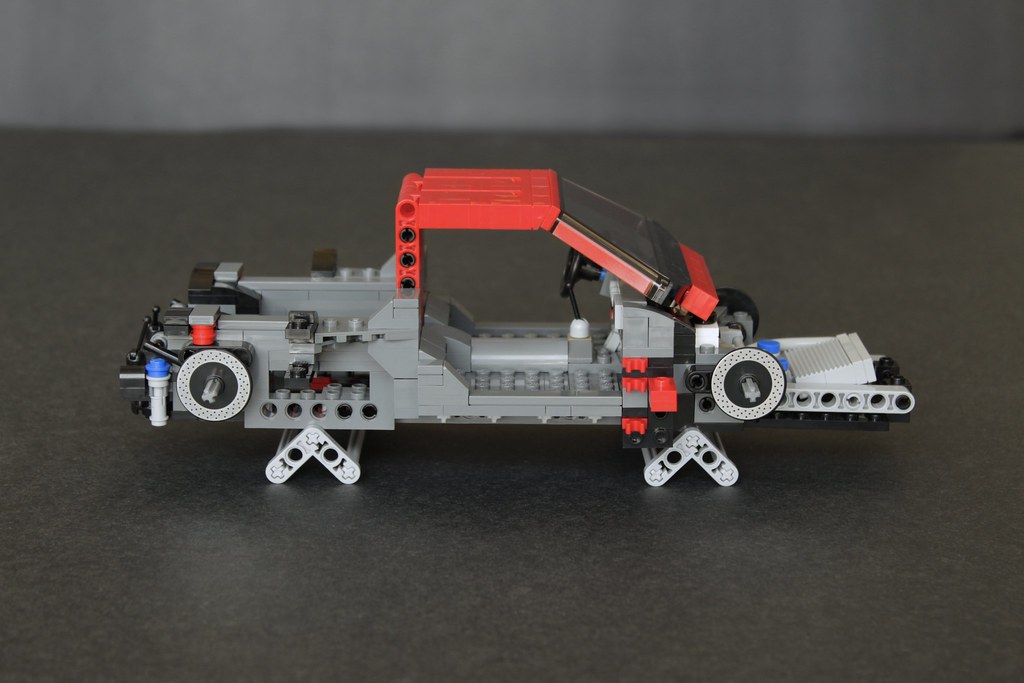 The engine and transmission assembly was also lengthened and lowered and features details for turbos, wastegates, exhausts, a larger intake manifold and intercoolers. Also tucked in there are the cam-drive ancillaries, oil filter, and transmission-oil line.  I followed the spec of a particular F40 LM which underwent a comprehensive resto-mod; much larger intercoolers, dual wastegates and many other updates went into the build. It's all well documented here: www.build-threads.com/tag/Ferrari-F40-LM-Restoration/ 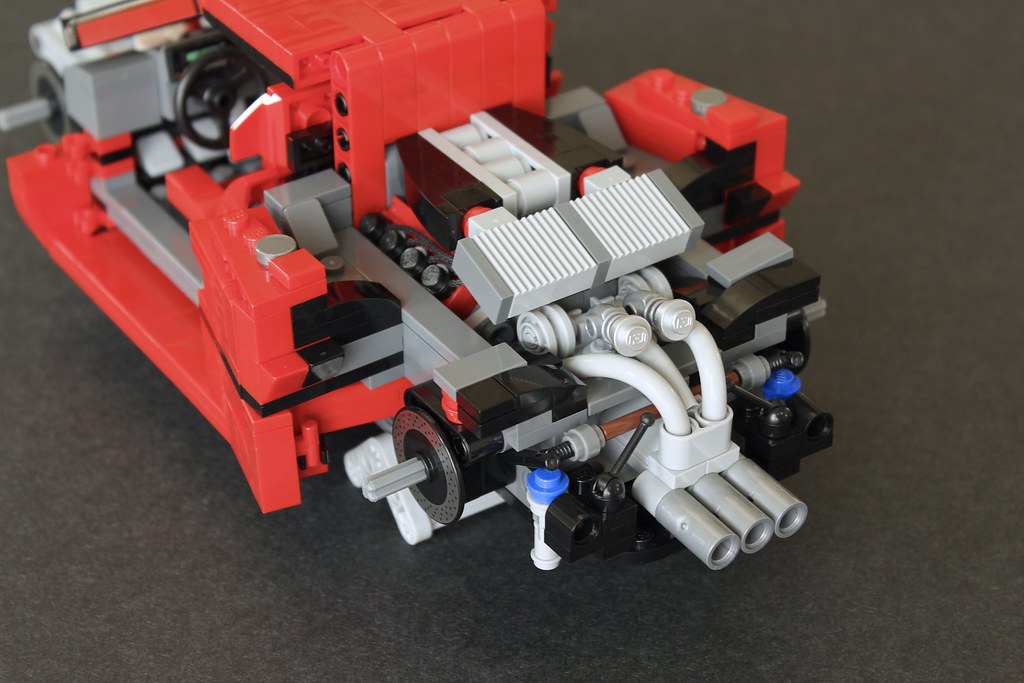 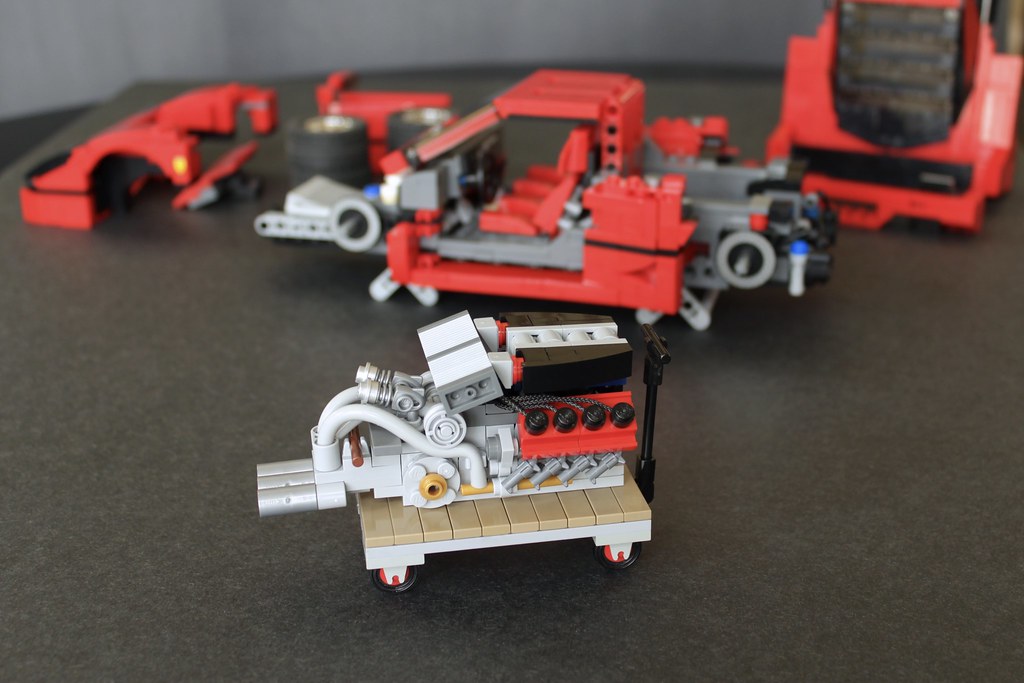 Custom stickers were created for the Braille battery, Magneti Marelli digital dashboard, and labels on the master cylinder fluid reservoirs. 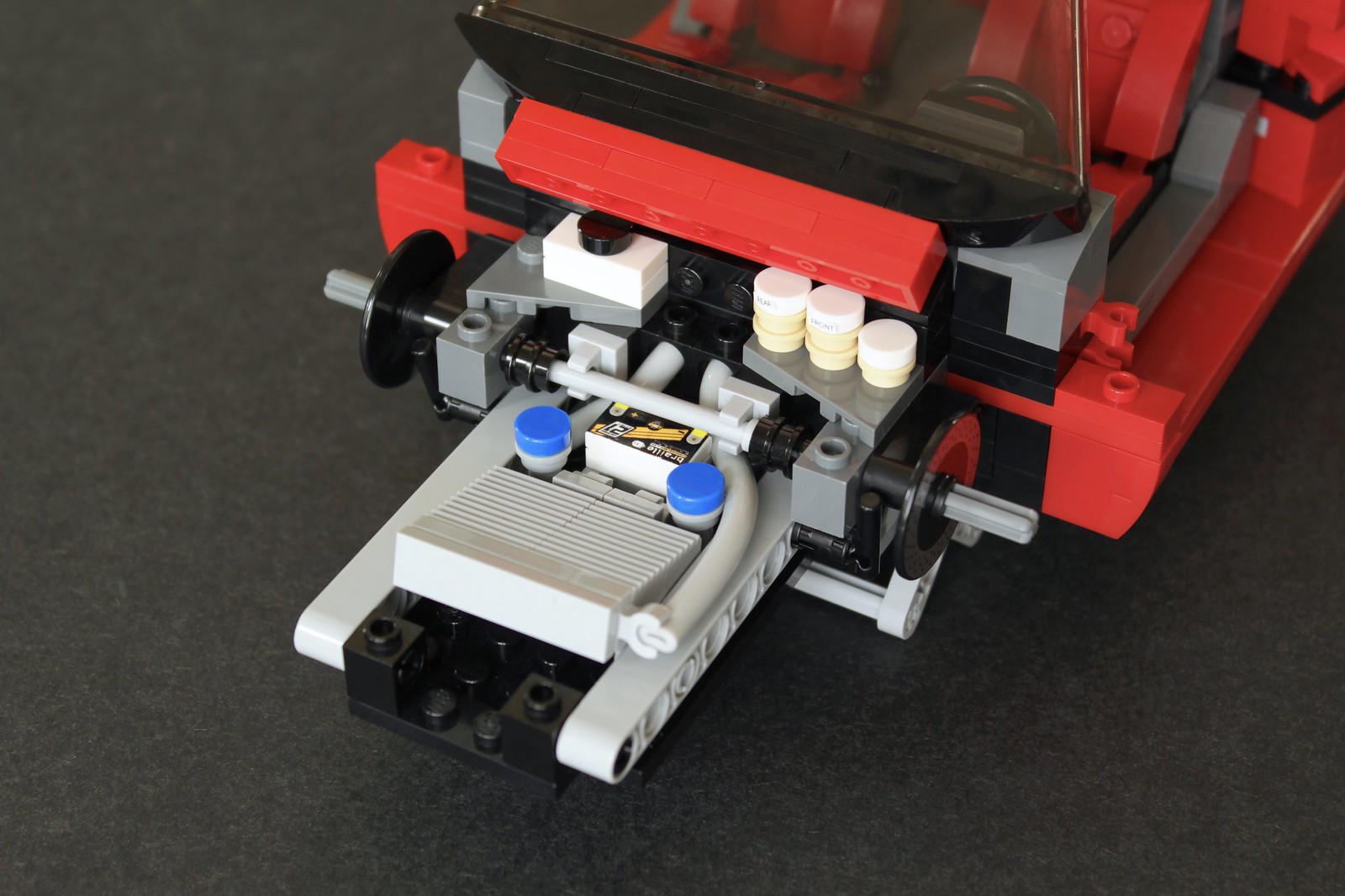 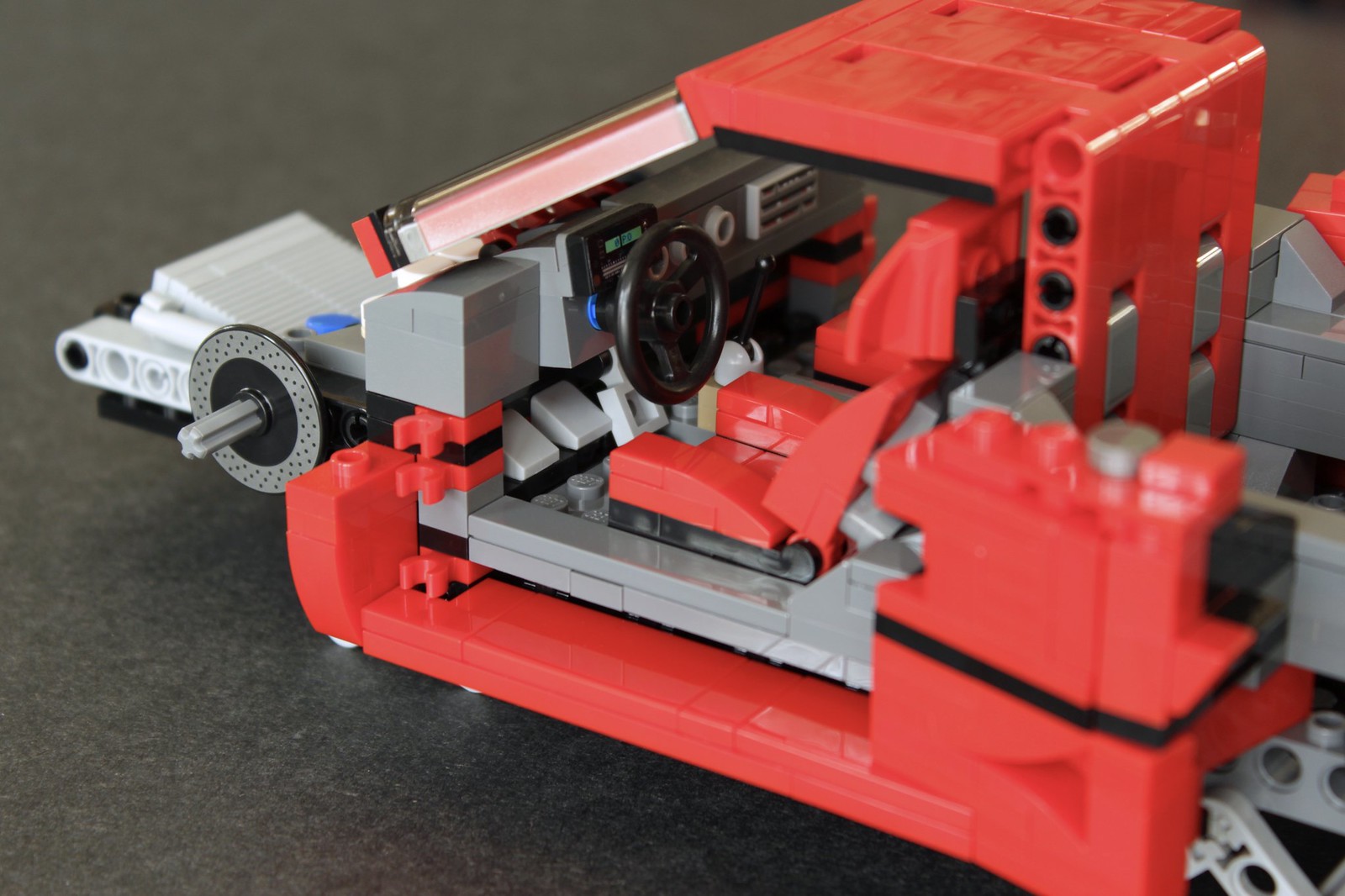 This project was a first for me at this scale (well, since I was a kid anyway) and a blast to do. It went way, way deeper than I had intended; motivation and inspiration for what was possible came from the large-scale masterworks of Luca Rusconi, Carl Greatrix, Norton74, and Robert Alexander (also Biczzz's Alfa, Gerald Cacas, Sir.Manperson, Alex Paschoaletto).
* Original base model: 1157 pcs.
* As built, appx: 1270 pcs.
* Parts changed or added: 490 pcs (39%) 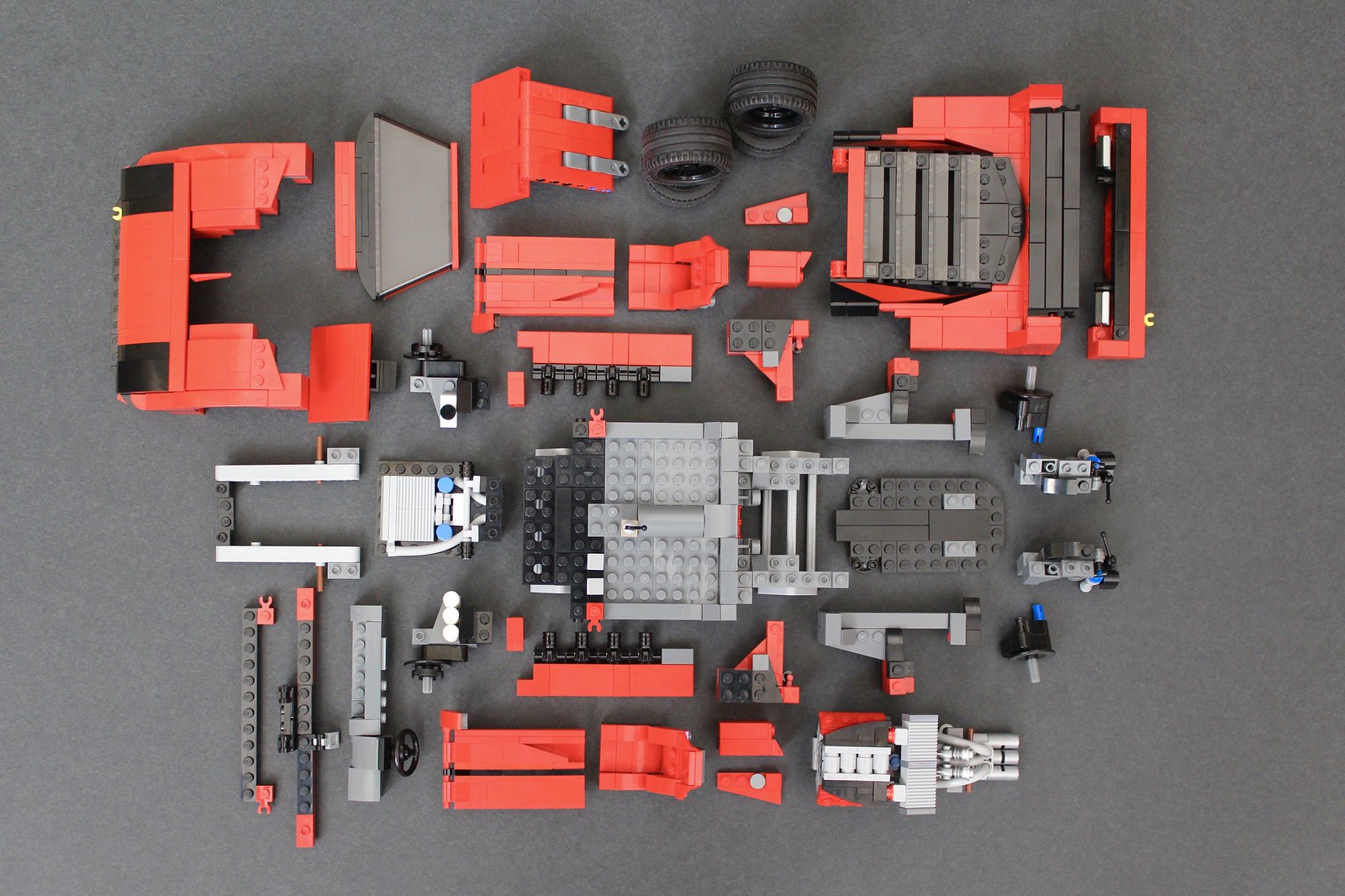 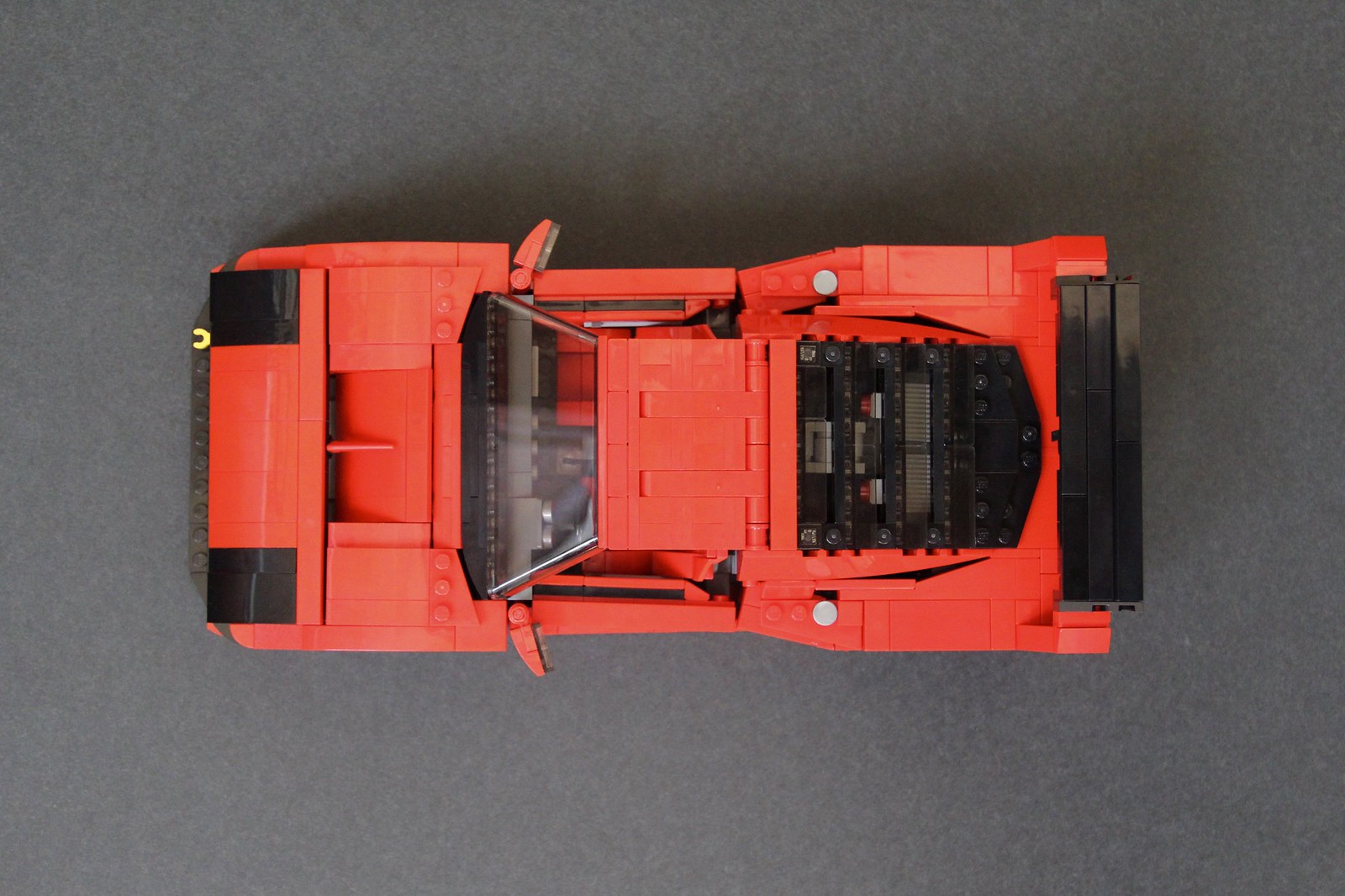